Mary-Anne Roberts has developed her voice to sing with the crwth. The voice production she uses on this recording is the result of experimentation. Her voice shines through the tone of the crwth and does not compete with it.

There is an early 16th century account, admittedly by a hostile English witness, comparing a Welshman’s voice to ‘the hussyng of a homble be’. Mary-Anne’s voice joins the buzzing sound-world of the crwth and bray-harp. The duo celebrates the strong acoustic phenomena created by the voice and crwth together. Bragod has begun to experiment with voice and lyre. At ceremonial performances of medieval bardic poetry, the poems would almost always have been sung by mens’ voices, extraordinary voices developed to sing a specialised high-art repertoire. 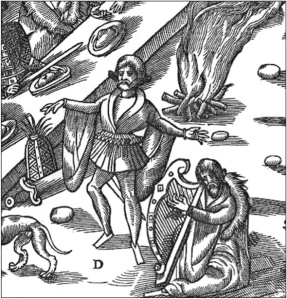 Detail from Robert Bruce Armstrong, The Irish and the Highland Harps (Edinburgh,1904) from the reprint of John Derricke’s Image of Ireland (1581). A bard (recaire) and harper performing before the Chief of the Mac Sweynes.

A 16th century image of a recaire, the Irish equivalent of the Welsh datgeiniad or bardic singer/reciter, shows the singer making wide gestures and Mary-Anne has created a language of subtle movement and gesture which enlivens the duo’s performance while enriching and freeing her voice.